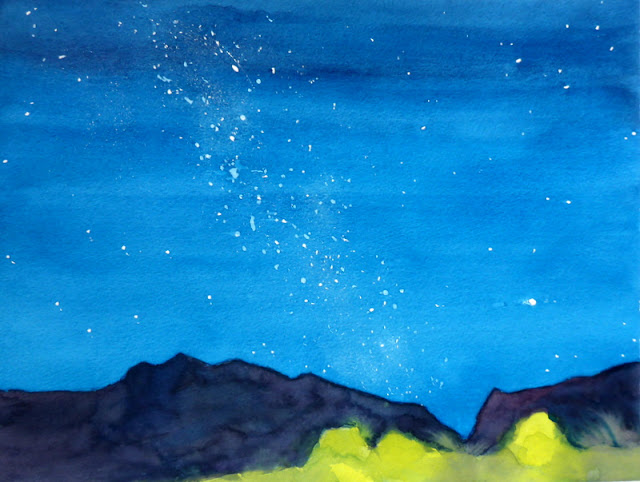 Another painting from photographs taken during our summer holiday in Kerry. This was quite late at night and the sky was an amazing blue colour (being mid-summer, there was still some light in the sky, even in the middle of the night). There were a few cars driving nearby, and their headlights were lighting up the trees in the foreground, in contrast with the dark mountains, which is what I've attempted to convey here.

Don't you love it when you can be somewhere so dark that you can see all the stars in the sky? It doesn't happen often in Dublin, unfortunately. I have two strong memories of starry nights: one was in West Cork 30 years ago - I was on a weekend away with the Trinity College Geography Club, and we were staying somewhere remote - I don't remember much else from that trip, but the sky was so so dark, and so so starry, it stayed with me. The other one was in Australia, near Uluru - we were staying in the nearby holiday village, and if I remember correctly, there was a night viewing point that you could drive to - the sky was alive with these countless stars - just wonderful. I probably even managed to briefly forget my snake anxiety!