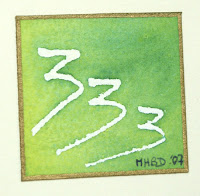 Sorry to be a couple of days late for this posting. But I did manage to talk to you on the day of your birthday, and it sounds like you had a great time. We really enjoyed having you over with us last week!
Posted by MHBD at 12:17 pm No comments: Links to this post 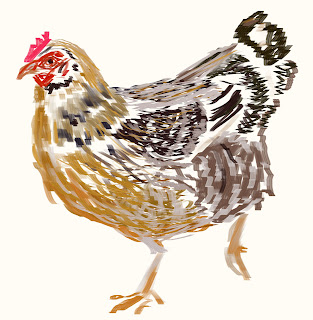 Here is where we are with our nice big plump hen: With the Wacom tablet and Corel Painter Essentials 2, I have been painting "over" the photograph. Very simple and gives great results! Using the colour picker, I copied the colours from the original photograph, then I applied the "digital paint" over a separate layer, using the palette knife tool.
I then copied this new layer and pasted it into an empty document. (I tried to remove the original layer, i.e. the photograph, but it was locked, and I didn't know how to unlock it in Corel Painter Essentials).

I know this is all cheating - no real creativity -, but I find it useful to use the tablet to get "into" a new project. + it makes me feel good!
Posted by MHBD at 3:01 pm No comments: Links to this post

Next project - a hen 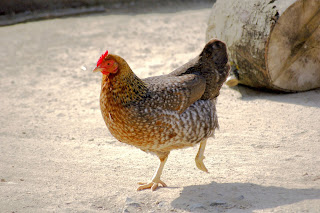 I have no idea how I'm going to tackle this one. The more I look at the picture, the more I get lost in the detail! I've been thinking of painting a hen for quite a while, inspired by Elizabeth Kincaid, in Paint Watercolours that Dance with Light. She has a few paintings of hens in that book that look so plump and gorgeous that I wanted to give it a try. Now I'm not so sure - How will I paint the dark and light feather pattern? How will I render the plumpness of this happy hen? (who was captured at Dublin Zoo last Easter - well, I don't know if the hen was captured, or if she was born in the zoo. All I meant to say is that we captured this picture of the hen at Dublin Zoo!!).

I've done a few squiggly drawings of it already, but I think I will need to do a more precise drawing before I go any further! The squiggly drawing technique is something I learned from The Natural Way to Draw, by Nicolaides. Brendan gave me that book for Christmas a couple of years ago, and I've only done the first couple of lessons. It's a tough book to follow, but I find that doing the squiggly drawings helps me look at my subject in a global way, without worrying about the details. So, it's a good starting point to get going, without worrying too much about getting it 100% right! There is a good review of it on the Amazon website (see the link above). Will it help me paint this hen? Maybe not, as I'll probably end up tracing the picture for the final painting, but I find that I need to try out different drawings before I can start painting. It helps me get immersed in the project. I guess it helps me see the subject properly.
Posted by MHBD at 3:05 pm No comments: Links to this post

Talking about restaurants, we went to Indian Summer in Stillorgan with Padraig and Mary on Saturday night, and I have to say that the more I go there, the more I like it. There was a great buzz - it's nice to see the place doing well, despite its poor location (it's upstairs, entrance from the alley at the back of the Mill House pub). The tables are nicely spaced, so you don't feel on top of the table next to you.

They offered us a complementary drink of vodka and watermelon juice, which was excellent - as I was the designated driver, I only had a few sips. I would have liked to drink more of it!

Being a creature of habits, I had a mixed starter platter, then a red snapper meen moilee. The fish was fresh and succulent, and the sauce was spicy but not hot. And the icecream was yummy - I had walnut and chocolate icecream that was to die for!

A definite Douze Points for Indian Summer! Their number is: 2108440
Posted by MHBD at 2:19 pm No comments: Links to this post

Yo Sushi have opened a Sushi bar in Dundrum Town Centre, so we had to try it. While it gets good marks for the food, I give it a big Nul Points for the prices.

Brendan and I went there for lunch on Friday, its first day of opening. There was a good choice of rolls on the conveyor belt, and a nice shrimp and glass noodle salad, but no sashimi on offer while we were there. I would have liked to try a dish of tuna - that's how you know a good sushi bar. Rice rolls are nice, but you can hardly see the fish! On top of that, we did not approve of having to pay € 1 for a glass of filtered water! It's only tap water after all, even if you can get a choice of still or sparkling and you can drink as many glasses as you want! Even with a free green tea, our bill came to € 31, and we could have eaten twice as much! Will I go again? Probably not until prices drop!

Compare this to the prices in Todai on 32nd Street in New York - $17.95 per person for all you can eat sushi - delicious and fresh and plenty of choice for less than the cost of a few tiny plates in Yo Sushi!
Posted by MHBD at 3:07 pm No comments: Links to this post

And for your birthday, here is the final version of my current project. I hope you like it! 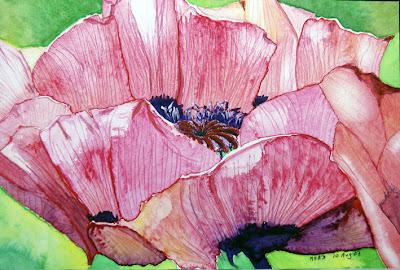 Posted by MHBD at 11:48 am No comments: Links to this post

My day at the seaside

We went to Bullock Harbour last Monday, this time armed with our camera. There was plenty of activity, lots of people renting boats, to go out fishing in Dublin Bay for an hour - mostly groups of foreign men - Eastern European, Chinese, Philippino, and a few families, a few dogs enjoying the view, a couple of seals looking for a few easy morcels, and even a cat, supervising everything that was going on! 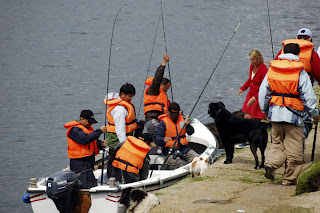 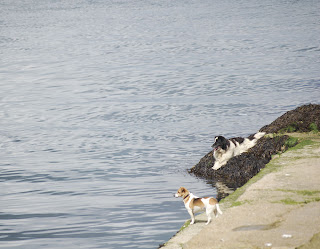 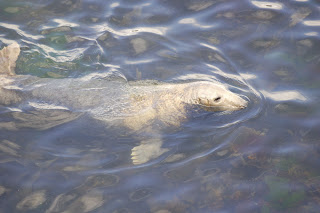 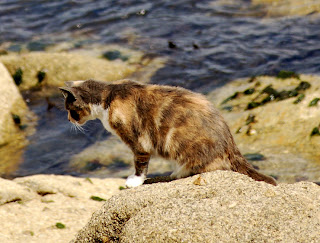 Posted by MHBD at 4:23 pm No comments: Links to this post

Email ThisBlogThis!Share to TwitterShare to FacebookShare to Pinterest
Labels: Ireland

Last Monday, I tried a new recipe from Recipes to Nurture, by Aine McAteer - Chocolate Mousse Cake!! As you've seen from earlier posts, I'm a big fan, but this recipe beats all others I've tried. It's dead simple - basically whizz everything in a food processor and stick it in the fridge, then eat. And it's delicious - Brendan has been eating slices of this cake at 10:30 in the morning, and at 4 in the afternoon, with a cup of coffee, it's so good! (Unfortunately for me, chocolate gives me migraines, and this proved no exception, so I only had one slice, but it was well worth it!).

No sugar, no eggs, no cream, no butter, ... It's not quite calorie-free, I'd say, but it's so full of goodness that you feel you can eat as much of it as you want, without clogging up your arteries.
The secret ingredient is silken tofu! And chocolate of course, a lot of silken tofu and a lot of chocolate. Mmmm. I think it's worth risking a migraine, don't you think?
Posted by MHBD at 1:50 pm No comments: Links to this post 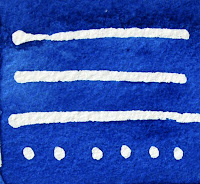 I hope you have a great day! The card is on its way!

Happy Birthday!
Posted by MHBD at 9:38 am No comments: Links to this post

Mary has loaned me plenty of books for the summer. As we have been busy, I haven't had as much time to read as last summer, but I've made the most of the few sunny days we've had in the last week or so (today not being one of them - it's been raining non-stop since last night - it's only just brightening up now, at 3:30, but I don't think we'll see the sun today!).

I've just finished reading Second Honeymoon, by Joanna Trollope. I enjoyed it, despite myself, and read it in record time. It's well written and I certainly wanted to know how it would all work out for the characters in the story. That said, I felt that the story itself was a bit empty, or that I could not connect to it. I guess it would mean more to me if I had children - Brendan has never had to share me with children (and, let's face it, Willow is pretty undemanding, really), so we'll never experience the day when the children leave the nest, leaving us all alone, or not alone, as in this book.

Just before that, I read Brick Lane, by Monica Ali. It is the story of Nazneen, a 17-year-old Bangladeshi girl who is married to a man twice her age and follows him to Britain, where he has been living. He is really annoying, fat and pompous, but he doesn't beat her, and is therefore described as a "good husband". The book follows her through her life in London, first the boredom of being stuck in a small grey flat all day, not speaking a word of English, how her children's expectations are completely different from her own, how she makes friends, how she keeps in touch with her sister who lives in Dhaka. Nazneen is both meek and strong, and maybe stereotypical in some ways, but she felt very real to me. And the writing is very good. For me, reading Brick Lane was a much stronger experience than Second Honeymoon. It may not acurately represent the Bangladeshi community in the UK, but I felt it opened a small window for me, that helps me understand how a Muslim woman sees the world
Posted by MHBD at 3:42 pm No comments: Links to this post

If she were still alive, she would be 98 today! Bon anniversaire, Marraine Flore!
Posted by MHBD at 1:27 pm No comments: Links to this post

I've darkened the green above the poppy and I've put in a bit of Schmincke Ruby Red in the centre of the poppy, to give it a bit more oomph. I think I will listen to Brendan's advice and stop tinkering with this painting. All I need to do now is cut it from the board, and sign it! I think I'll do another one straight away with the Ruby Red, just to satisfy my curiosity! (Click on the picture to see it in larger size)

And here is a sample of this famous Ruby Red I've been talking about, just in case 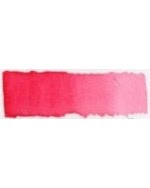 you were wondering what it actually looks like!
Posted by MHBD at 11:32 am No comments: Links to this post