Renewed energy for the last few days of International Fake Journal Month? There can still be ups and downs, even at this stage!

Here is what I did for Day 26. I was quite inspired when I found a postcard from 1983 from Shinobu! Check it out on the Fake Blog! 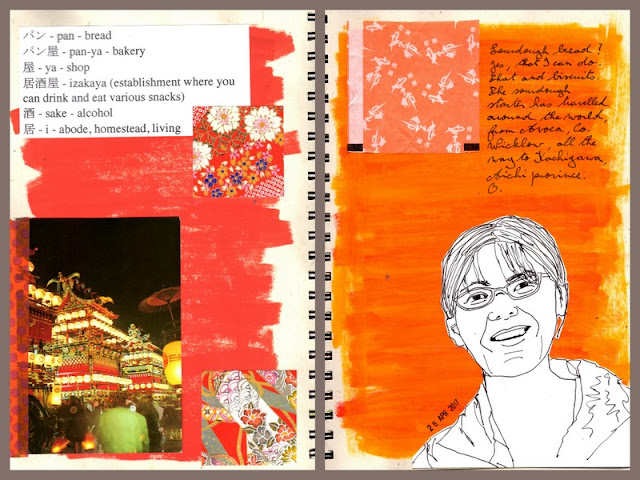 Posted by MHBD at 11:28 am No comments: Links to this post

A fantastic day at the Experience Japan Festival 2017 at Farmleigh. The weather was grey and quite cold, but the organisers must have made a good quantity of "teru teru bōzu", as it stayed dry throughout the day.

The crowds were even bigger than last year, probably a lot to do with the free shuttle bus from Dublin Bus, bringing in people every ten minutes from Parkgate Street near Heuston Station. We found the traffic much easier on the way in than last year. On the way out, well, it was busy. What can I say!

In terms of the program, a similar fare, which was perfect: performances at the main stage (drums, dancing, cute little children singing, etc. etc.), a food court (much bigger than last year - crazy busy, long queues for some of the stalls, not enough benches, but we managed!), craft exhibitions, calligraphy (get your name written in Japanese), haiku readings, rakugo, cosplay, origami, kimono dressing, and of course, martial arts demonstrations!

We went early and I stayed on, as this was the location chosen by Dublin Sketchers for its outing this week! I enjoyed sketching the martial arts, mostly the kendō, and some aikido masters at rest (or, rather, in conversation)

And a Japanese lady even gave me three homemade onigiri. Oishikatta desu!

I can't believe I missed the dorayaki stand, though!

Here are my sketches from the day: 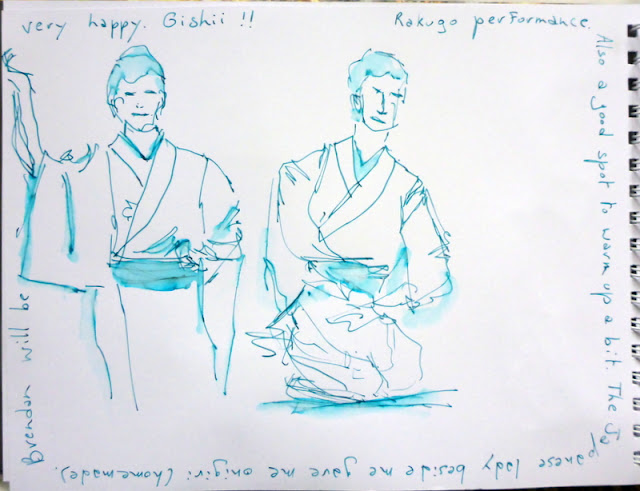 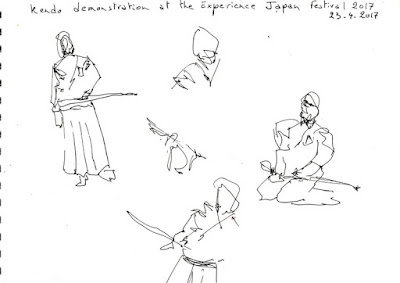 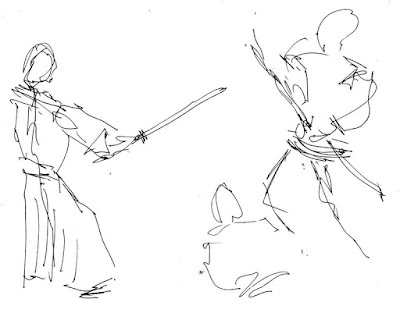 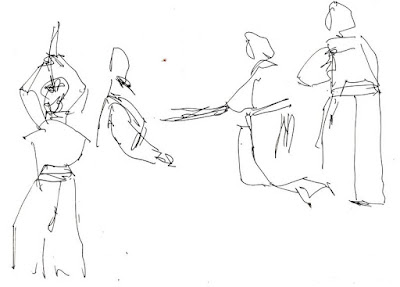 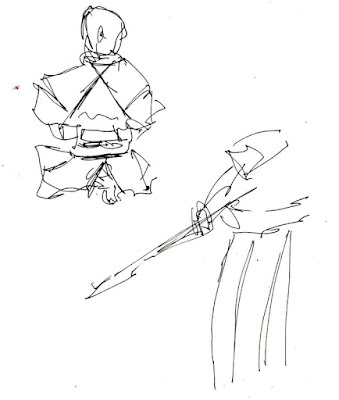 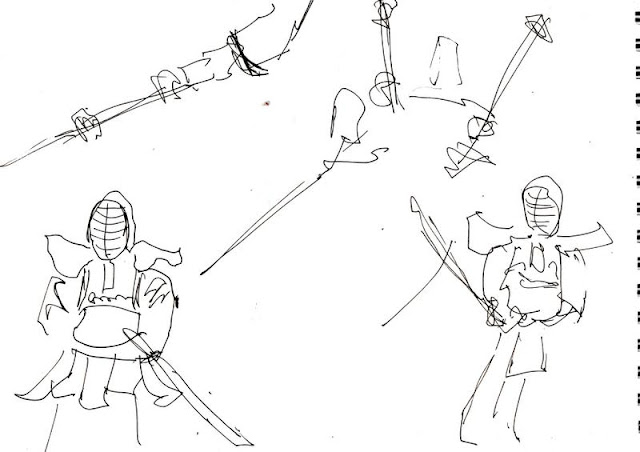 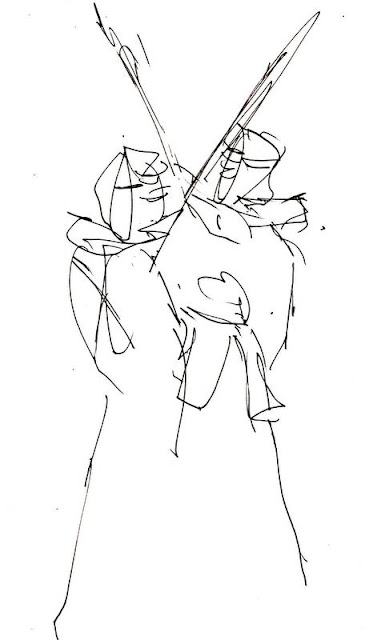 And to finish, a little warabe uta I just found! 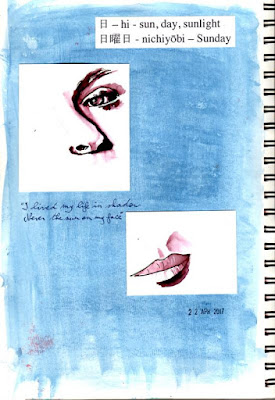 Odile's story is slowly (very slowly) unfolding. Not much happened on the 22nd, but I was very happy with the drawings I did for that day. Maybe because my main problem is getting the overall shape of the face right? Anyways, there is nothing wrong with just picking a few features and floating them on the page. I'm making the rules after all! And maybe Picasso experienced similar problems??

Posted by MHBD at 6:34 pm No comments: Links to this post

A double spread - Easter holidays are a good time to catch up on my art! 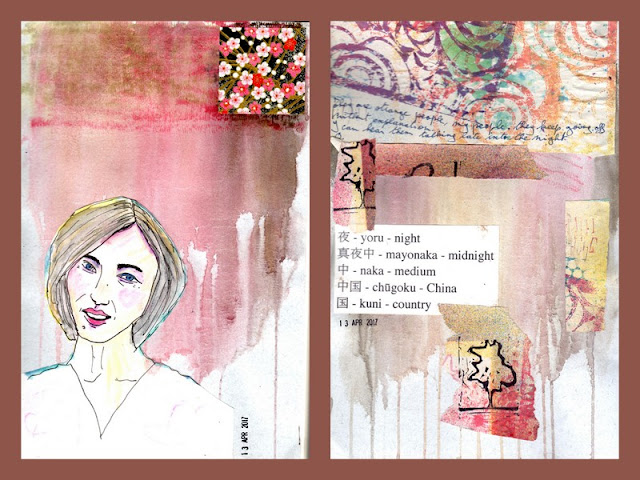 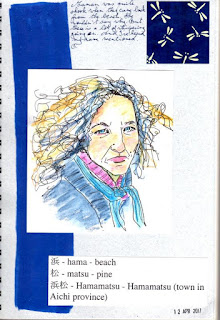 I'm sticking at it! Some days are harder than others. I think the goal that's slowly emerging is to draw faces every day - most days I'm struggling with getting a likeness. I think I'll have to publish a list of all my models at the end of the month - some are more famous than others. Most are not recognisable! Sometimes, the link to the story is pretty tenuous or obscure. But there is a link every day!

The picture here is of Véronique, who lived in Hamamatsu, and died in 2011. I've tried to draw her portrait a few times. This is the closest I've got, but she's still eluding me.

Odile's style is evolving as she discovers her materials and plays with them. At the moment, she's liking the Neocolor II water soluble wax pastels!

She says she wants to do environmental studies or marine biology, but she still doesn't have much of a social or environmental conscience, much to her mother's chagrin. She does love studying Japanese, though!


Posted by MHBD at 1:38 pm No comments: Links to this post

My most ambitious, and challenging, sketch to date! The sun was shining and I decided to sit outside the National Library from up close and personal!
At times, I was sorry I had picked such a difficult subject, and only my stubborn streak carried me through to the end. Wonky lines and all.
It took me nearly two and a half hours.
Ellipses and perspective are not my strong suit! 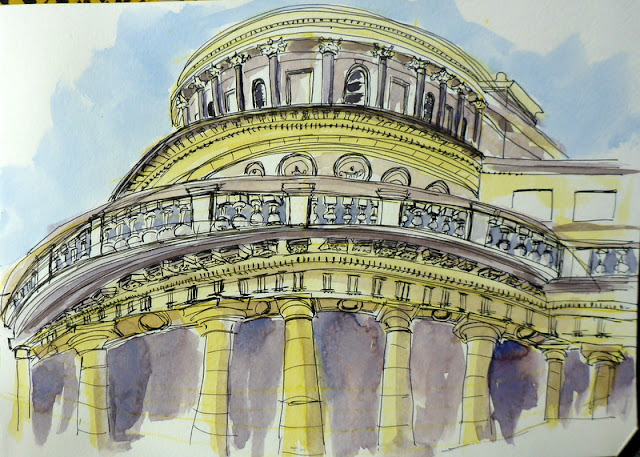 Posted by MHBD at 4:45 pm No comments: Links to this post

Idomeneo was my last opera for the Met HD season. There are a couple more, but I wasn't interested in them. I like Mozart operas, and I had never heard of this one. As it turns out, Idomeneo was the first opera Mozart ever wrote. He was something like 24! So it might not be his best, but it certainly showed the promise of what was to come.

The whole cast was fantastic in terms of their singing and performance. The only one I felt was miscast was Alice Coote as Idamante - she didn't work for me as a young prince - I think her body might be too womanly to play a young man. And the costume she had to wear didn't help. Well, the production was old, with a very static set and cumbersome costumes overall, but the music was fantastic. I love Mozart!

Posted by MHBD at 1:58 pm No comments: Links to this post 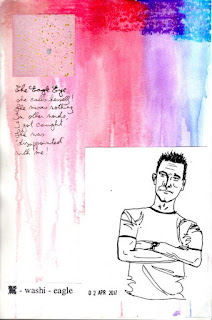 I won't be posting as much here for the month of April, as I am in the middle of Fake Journal madness - so if you want to find out what's going on in Odile's world, click here! Her violent and rebellious streak hasn't emerged yet. She's only 20 after all, living the life of a typical South Dublin girl. Except she's not typical. For one, she's half Belgian. Her mother, who is driving poor Odile mad, might make the odd appearance! The big question is whether or not she'll get to meet her older self. And even if she does, will she recognise herself in that old lady? Will she even be puzzled by the fact that the said old lady has a cat and a dog that look just like her own?

If you want to see the story unfolding, you'll have to go to my Fake Journal page!

Some of the pages are quite colourful. And you can even learn a few Japanese words! 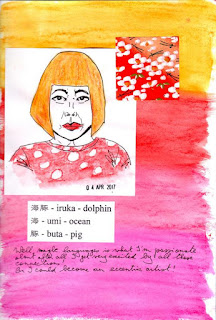 Posted by MHBD at 3:09 pm No comments: Links to this post 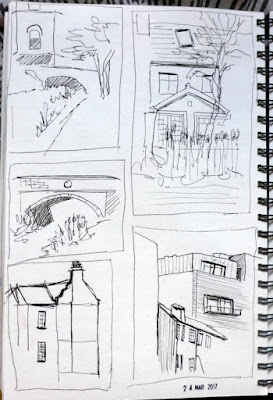 The sun was shining, so I took an hour to sketch outdoors. What amazed me was how many options I discovered once I started with thumbnails. I could have sketched another 10 of those and still not captured all the scenes in front of my eyes!

I will definitely revisit some of these and try to develop them into more substantial watercolours maybe, if I ever get the time. I really like the little bridge in the middle, and also the mews with the reeds in front of it.

In the end, the focus I chose was not any of the thumbnails I had drawn. Actually, it started as a thumbnail, and grew from there, and then I decided to add watercolour. So, I was anticipating Lesson 11, Working from a Focus, but I didn't know it! The bridge is wonky, but the sketch captures the lovely day - we were both working in the Baggot Street area, and we went for a bite to eat in a place called Angelina's afterwards - it was just across from where I was sketching, and it looked inviting - I had a delicious California salad - chicken, bacon, lettuce, kale, sunflower seeds, blueberries, avocado, quinoa, apple - just my kind of thing! 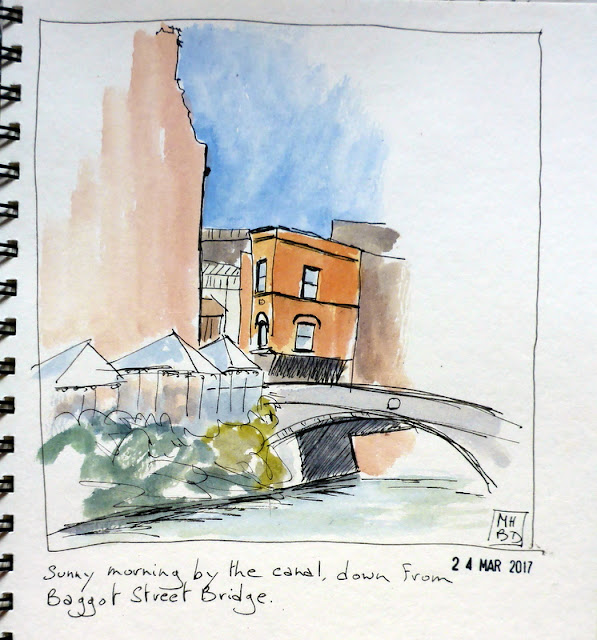 Posted by MHBD at 1:29 pm No comments: Links to this post

Juggling a lot these days! It's over a week since I was at the Olivier Cornet Gallery with Dublin Sketchers.
I arrived early and got a seat in front of the sketcher-magnet plant (I don't know its proper name), so I drew what was in front of me, without worrying too much about the pot. Actually, not worrying at all. I just loved the shape of the leaves!

Initially, we didn't think we'd have access to the Blue Room, but it was free, so I managed to also draw a few of the building across the way. Well, part of it anyway.

Other sketchers accomplished much more than me on the day, but I'm happy with how my sketches worked out all the same! 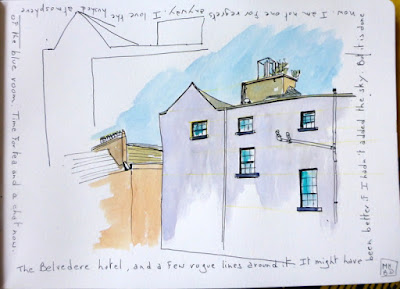 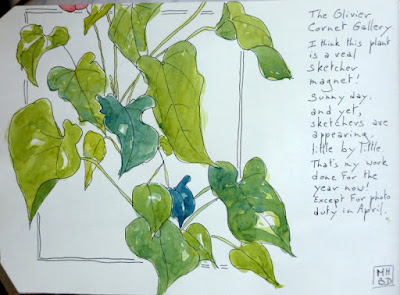 PS: nice exhibition there at the moment, until the 20th of April, with works by John Fitzsimons

Posted by MHBD at 11:47 am No comments: Links to this post

Rain on the horizon - electricity lines?

Up to last week, I really wasn't sure about these two paintings. Now, it's like they've grown on me! The only decision I have to make is whether to add the electricity poles and lines - They are there in reality - and depending on where on the road you are, they could be coming from the left or the right.

So I'm going to try a few options on acetate and decide what works best before I even pencil anything on the watercolour paper. 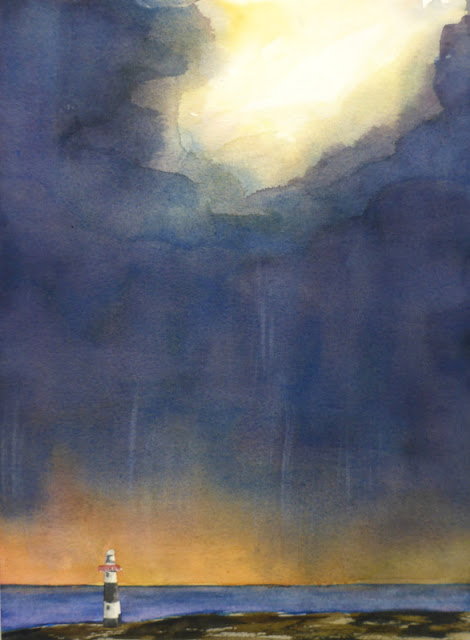 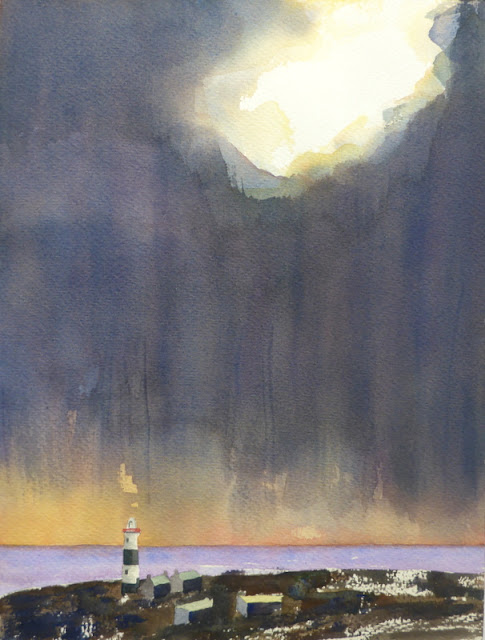 PS: It's a week since I wrote this, and I did try the electricity poles and lights, and it didn't work, so I left these two paintings as they are, and they do look good when framed!

Posted by MHBD at 2:21 pm No comments: Links to this post

A day at the seaside

Sketching more on location is one of my goals for this year, so I try to carry a little sketchbook and basic supplies with me when I'm going somewhere nice (I should really carry one with me at all times, but I haven't made that jump yet). I was in the Dun Laoghaire area last week, and I managed to fit in three little views over lunch - pen and watercolours.
It was fun, if I don't listen to the little voice that tells me that a martello tower is not a straight-up cylinder but is actually tapered, with the base fatter than the top. 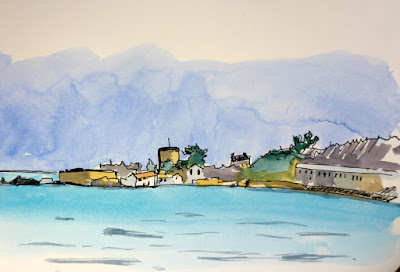 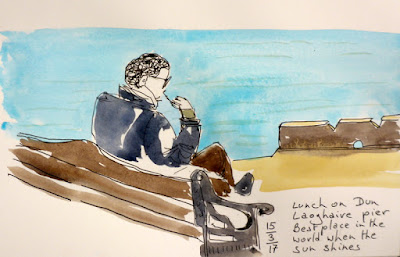 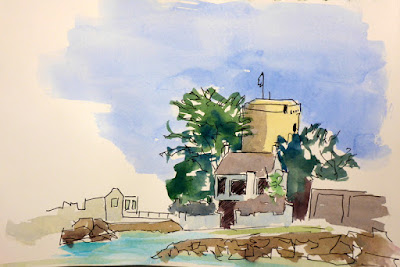 Posted by MHBD at 4:14 pm No comments: Links to this post