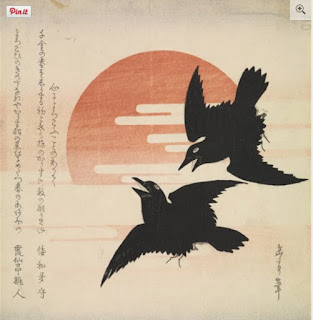 I went to the Chester Beatty Library yesterday. It's not a place I visit often. Actually, I think the last time I was there was in 2007 for a special exhibiton of Yoshitoshi's works, One Hundred Aspects of the Moon.

I was recently given the gift of a Plus One membership to the CBL, so I'm looking forward to discovering this beautiful place and all its treasures

What I did yesterday was a bit mad (Are you surprised?). As you know, I'm studying a bit of Japanese. Progress is slow. Memory is not so good. So I decided to join a Japanese language tour of the museum, organised by the Embassy of Japan - to sharpen my ear!

Well, I was very brave. It was a small group. A few Japanese people, an Irish gentleman who's been studying Japanese for the last 7 years and a German student who's been doing Japanese in university for the last three years. There was a lot of nodding during the tour. I didn't nod much!

You know how it is that any language you don't speak sounds really fast? Well, the guide, a lady by the name of Hiromi Anzai, spoke at warp speed! I think I understood about one word in a thousand! I stuck at it for about an hour, and then I bowed out, missing out on the free tea/coffee after the tour, and the possibility of making contact with Japanese people living here in Ireland. But I got the feeling there was at least another hour before the tour would be done, and my brain was fried at that stage. But I won't let that put me off! There is another tour on the 13th of March, and the 10th of April. I'd better start studying!

PS: the image I chose from the CBL website is entitled Crows and Rising Sun, by Gakutei
Posted by MHBD at 10:15 am