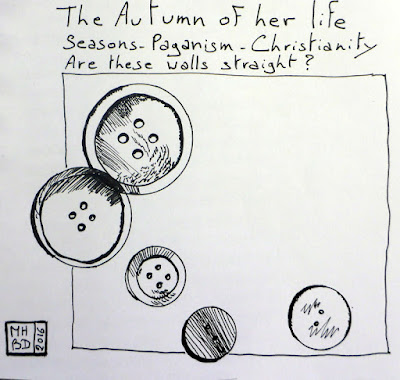 (Ignore the text above the drawing - I was at a funeral that day and the priest was talking about the seasons of life and said the decease was in "the autumn of her life" - she was 91, so it got me thinking)

Inspired by my muses, I went ahead and drew a small sample of my button collection. Most of the buttons I have in my box are from Boden clothes that I bought over the years. But don't ask me to match any of them to their parent top or cardigan. And the irony is that if I had been organised, I could have kept track, as each button came in a little Boden paper bag, on which I could have written the name of the outfit. But life is too short for being that organised, even for me. And anyway, I took a lot of them out of their bag over the years, so I could see the buttons instead. I wonder would a jar be better than a box? So I could see them at a glance.

They do hold the key to a lot of our emotions, buttons, don't they? For me, it's afternoons spent at my Granny's kitchen table (the Knitting Granny), going through her button box (one of these sewing boxes that opens like a toolbox), organising the buttons - mostly in rows. I can't remember if I organised them by size or colour (probably both, I'm a very organised person), but I remember long sinuous rows, snaking around the table.

I also remember playing with her old sewing machine, one with a big pedal that you had to press in rhythm to activate the wheel that made it work. She did have electricity in the house - my grand-father was an electrician and they were amongst the first on our street to have a colour television. But I'm not sure she ever had an electric sewing machine. She was more of a knitter than a sewer (although I do remember a beautiful strawberry red velvet dress she made from fabric my god-mother had bought for me. I must ask my mother if she still has it. I wouldn't be surprised.)

We didn't have iPhones in those days. And yes we got bored sometimes, but buttons were always there for rainy days. And the sewing machine.