Despite some negative reviews on the blogosphere, I really hope this documentary will be shown here - Wagner's Dream is about the Robert Lepage's production of The Ring for the Metropolitan Opera. 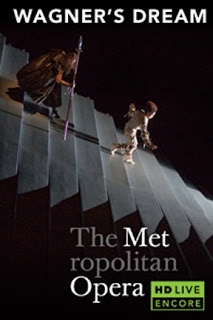 I only saw the last of the four operas on Met HD, Gotterdammerung, but it certainly gave me a taste for Wagner. There is something about the interaction between the people and the machine that spoke to me. And I love "behind-the-scenes" documentaries, which is something that's become more and more common in the YouTube age, of course. Maybe you could argue that it takes away some of the magic, but, for me, it enhances and prolongs the experience.

Hopefully it will come to cinema screens in Dublin soon (maybe I've missed it already?). Or it will be available on Netflix or DVD, or even SkyArts2 (which I'm sorry to say has been showing nothing but André Rieu for the last two weeks - what's that about? Seriously!)?
Posted by MHBD at 2:20 pm