Deb sent me a lovely picture from Tom Price - Tom Price is not a person, as I thought originally, but a town in Western Australia, and it reminded me I have a tube of Aussie Red Gold from Daniel Smith that I don't get much chance to use around here. The view below is not the photo, but a shot from Google maps which I like a lot and might paint too, some day! Look at that red earth, isn't it wonderful! And the fresh green in the vegetation on the side of the road is such a gorgeous contrast to the red. Definitely going to paint that!


Anyways, the photo I have is a red-earth path going up a hill, with golden grasses on both sides, the whole scene lit by a low sun. And the question I'm asking myself is how to represent the light grasses against the darker shadows of the earth, which look purple in places. So the mix I'm thinking of is Aussie Red Gold, Hansa Yellow Medium, Permanent Alizarin Crimson and Ultramarine blue, which is looking quite promising in my witches brew recipe testing book (an old Winsor and Newton sketchbook). I might have to flood the paint with water (with a pipette) to create that light flowy wavy effect, but that's feasible. The big question is the size of the paper - I have a lovely Hannemülhe in a long format and it's not too large so that might do the trick. Now all I have to do is make time to do it! Easier said than done given my current busy schedule! 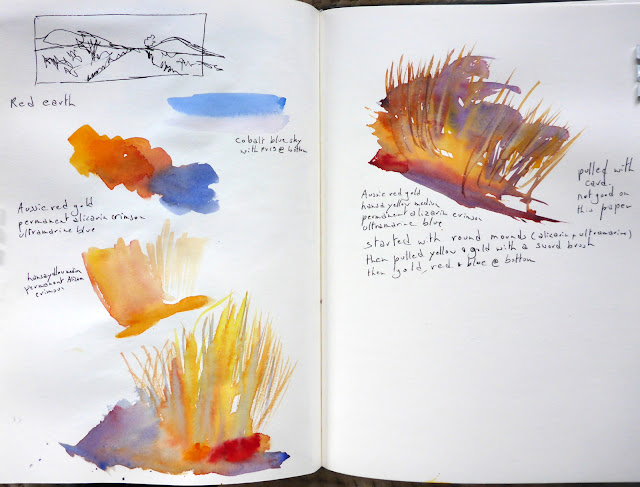 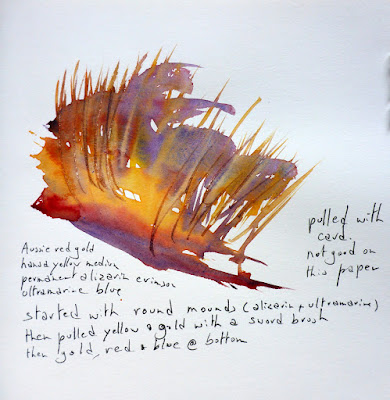