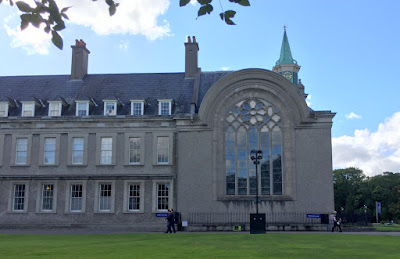 Do I like a challenge? I would normally say yes, but I'm not so sure now, after tackling this corner of the Royal Hospital, Kilmainham (home to IMMA). Last time I was there with Dublin Sketchers, I sketched a humble little shed - that was all I felt capable of. And I was really happy with how it worked out. That was in January of this year. It feels like a lifetime ago. It's been a busy year.

So, despite some serious proportional errors (ratio of chimney height to stained-glass window height, size of windows, to name just two), I am very proud of this sketch. I actually measured and did a basic pencil sketch to figure out the positioning of the various elements. And I really tried to understand the building, to put into practise all I have learned over the last few weeks and over the last year.

It was a beautiful afternoon, warm in the sun, cool in the shade. We're having a nice autumn so far - yes, we would have liked warmer temperatures, after a non-descript summer, but you don't always get what you wish for. At least we don't have hurricanes or monsoon rains in Ireland. And I found the perfect spot, a little out of the way (only one small group of Americans commented on my work, and that was only in the first half hour), with a good view of my subject. But I struggled with a few things: My favourite fountain pen ran out of ink (my own fault - I had another pen, though, but with a thicker nib). First page nerves too - it's never easy to start a new sketchbook, even if it's identical to my previous one (I'm sticking to watercolour-paper Moleskine - by the way, does anyone know what's the right pronunciation for Moleskine?). The main trouble I had was that my lower back started causing me major pain - it had been sore for a few days, but I thought I was better - hunching over my sketch for an hour and a half was not a good idea. So I added the colour indoor and finished the windows at home. And I applied one of those heat belts - it really helped. Now, 4 days later, I still struggle with my back - I've done yoga for lower back pain and yoga for sciatica (a great YouTube class), I've walked, I've applied heat, I've minded myself. And when I think I'm better, it hits me again, like this morning, when I was tying my shoe laces before heading out for our dog walk. So here I am, writing this with a hottie against my lower back, and another one under my left foot. But I'm refusing to let it stop me! I'll be out sketching again soon.
Posted by MHBD at 12:06 pm