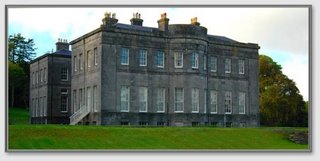 On Sunday, Maire, Jimmy, Oisin, Fiacra and myself went to Lissadell House outside Sligo.
It's a big block of a house, grey and imposing. The grounds around it are beautiful, with views of Ben Bulben and the other mountains around Sligo. It's close to the sea and there is even a little beach on the way in to the house.

We took the tour, which brought us around the ground floor and basement. It was very interesting - the guide had a nice touch, giving a good mix of historical data and more personal anecdotes. Here are the bits that I liked best:

The rooms around the ground floor look cosy, for such a big house, and you can imagine the house full of children running around the place. There were many children in the Gore-Booth family, who were the owners of the house for a number of generations, until it was bought by Edward Walsh and Constance Cassidy. It was said when they bought the house a few years ago that they were going to live there, and the website implies that it is their family home, but the tour guide said that they didn't live there, that they had bought the house as an investment. Not sure what to believe! Maybe they will move there when the house and grounds are fully restored...

They bought it for a very good price, as the State didn't want to buy it, which is a real shame, considering that this house is closely linked to important times in Irish history.

It is associated with Yeats, as he was a frequent visitor to the house.

More importantly, it was the home of Countess Constance Markievicz (née Gore-Booth), who was a member of Sinn Fein and fought during the 1916 rising. I took this bit from the Lissadell House website: "Constance was sentenced to death for her part in the 1916 Easter Rising, but the sentence was commuted to imprisonment (in England). She was released in a general amnesty in 1917 and the following year was elected a Sinn Féin member of the English House of Commons, the first woman ever elected to Westminster. "

The house has gorgeous views over the sea and over Ben Bulben. But I have to say that I would not like to live there. Too big and square for me!
Posted by MHBD at 11:55 am