It took a little while to receive them, but I now have my 8 Diários Gráficos from Firmo, as I am their official ambassadress for Dublin for the year until September 2019. I need to get sketching!! I currently have a few other books under way, so I'm getting a little bit of a mental block about a new sketchbook. Yet, I know how lovely it is, and, once I start, it will feel like a comfortable pair of shoes that I'll want to wear all the time!

So, on our final outing of the year with Dublin Sketchers, I brought it with me and did some quick sketches of the people sitting in a café. I used a Pentel Brush pen and a Pilot Prera. I might add colour later. The paper takes a good bit of watercolour, so I know it will make the sketch pop! 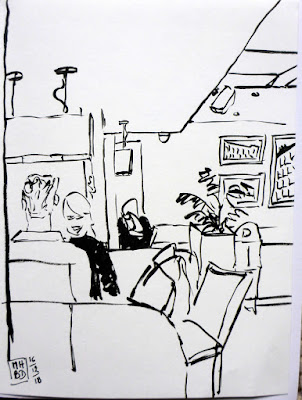 In this sketch, I tried to do a general view of the room, with strangers absorbed in conversation or study. It is one of these cafés where students hang out. Some were there when I arrived and were still there three hours later!! An ideal spot for us sketching, in that management isn't pushing us to buy a coffee every hour. But some of the good seats were taken for a very long time!! 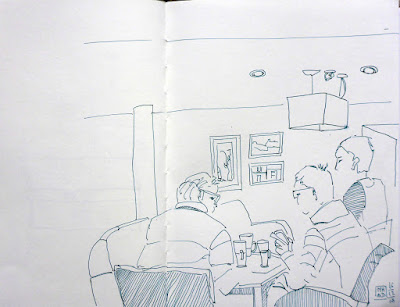 This one I sketched with my Pilot Prera fountain pen. A lovely fine nib. Not as expressive as the Pentel brush pen, but it allowed me to add more detail. And hatching, which I find very soothing. I wasn't in the best form for sketching, but hatching settled me a bit. I don't know what was going on in my head, but I was getting frustrated with my sketches - somehow, I kept comparing them to the ones I've done in previous years (2017 and 2016) and I felt I was regressing. Click on the links and tell me if I'm going up or down!! 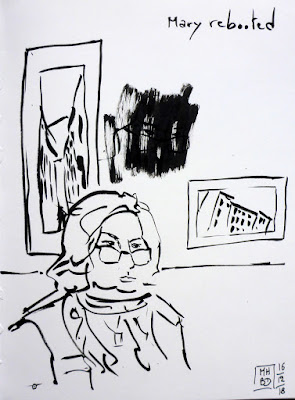 The black blob is where I covered a failed attempt with brush pen - you can still see a bit of the face under the black. This is where I remind myself that sketching is about experimentation, not about a perfect drawing! I might try and cover that with an acrylic marker?

So, three sketches done in one go, that's how much I love this little sketchbook!!
Posted by MHBD at 10:08 am