I think we enjoy Culture Night the best when we don't really have a plan, but are willing to pop in to any location that grabs our attention as we stroll by! We didn't get a brochure this year, and there simply were too many events to read through on the website.
I had arranged for Dublin Sketchers to meet up at The Duke around 8pm, which gave us plenty of time to try out a few places. Our only criteria is that we won't queue for anything. If I never get to see the Freemasons' Hall, well, so be it! There are plenty other wonderful venues in the city that throw their doors open for the evening! 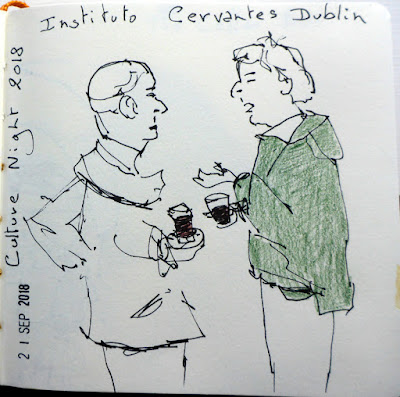 We started with samples of food from Mexico, Argentina and Colombia at the Instituto Cervantes. Delicious, great value, and set us up for the night. Couldn't get a seat, but that didn't stop me from sketching these two men in conversation. 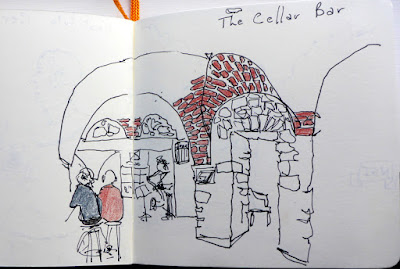 Second, a drink and nice jazz in the Cellar Bar in the Merrion Hotel. I wasn't dressed as glamorously as other women, but hey I was too preoccupied trying to sketch the ceilings to care!

Next, we decided to walk through the National Gallery, as a shortcut. But they had lively music just about to start as we walked by, we ended up staying a good bit longer than planned

First samba music - I'm not sure who the group were, but they were amazing - all drums and percussions. Hard to dance and sketch at the same time, but I think I managed! 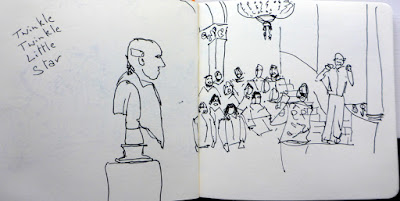 As we went indoors, we saw that a choir was in full voice in the big room near the entrance. We popped in and loved the peaceful atmosphere. I don't understand why there was someone signing the words. Political correctness to the extreme? 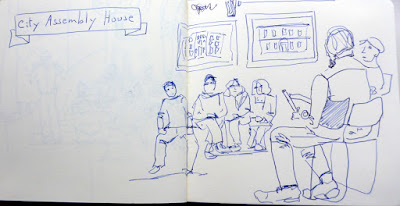 Our final stop for the night was City Assembly House, newly re-opened since its refurbishment by the Irish Georgian Society. An interesting exhibition of drawings of the (mostly derelict) great houses of Ireland by John Nankivell, and music by two DIT students, Fionn ÓhAlmhain (Uilleann Pipes) and Jack Hennessy (Flute).

After that, it was time for a pint or two and a chat with fellow urban sketchers at The Duke.
Posted by MHBD at 11:35 am