When I came back from Porto, I was full of good intentions - I was going to practise techniques from Liz Steel, Shari Blaukopf and Suhita Shirodkar, maybe focusing on one each week. For a while, I did explore these styles and what I had learned from these wonderful artists in Porto. But I'm reverting to what I'm comfortable with. Sometimes it works, sometimes not.

The area between the Liffey and Grand Canal Dock doesn't have baroque churches, narrow streets or street performers. It's all new buildings, construction sites, and a few remnants of its industrial past. Perfect for pen. 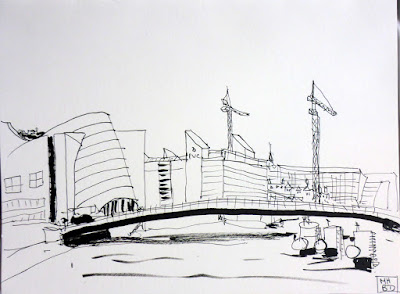 I started by the Liffey, drawing the Convention Centre and downriver. I did draw the Calatrava bridge, but decided to ignore its strings. I'm sure they're not called strings. Well, it looks like a harp, and a harp has strings, so maybe! And they're a pretty significant feature of that view. But I was really only interested in what was behind the bridge. So that's what I decided to do. 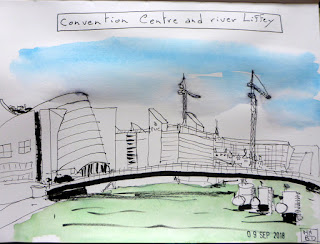 When I got home, I decided to add a dash of colour, but the Derwent Grafik pen isn't waterproof, so it didn't really work out for me. I'm glad I had taken a picture first!

After I was done there - it was a quick sketch, I was standing up - I started walking towards the Bord Gais Theatre. I came across a little park, and when I looked back, there was this amazing brick chimney in the corner, surrounded by offices and apartments. So I sat down and spent a bit of time drawing the chimney and its environment. Straight to ink. No time to hesitate or calculate.
I've read a little bit about this area. It's called Docklands Chimney Park, and the playground around the chimney was designed in collaboration with children and people living in the area. To be honest, it's a little bit bleak. I was there on a sunny Sunday afternoon, and there wasn't too many people about. For one thing, it was in complete shade, and a tad chilly. And the palm trees were apparently chosen because someone said that they loved climbing trees when they were small. Have you ever tried climbing a palm tree? It doesn't strike me as the best choice. Plus they were imported from Sicily, at some cost no doubt, and one of the three is already nearly dead. Visually all very interesting for me, but a bit sad for children, I think.

I did add colour to this one too. And again, I'm not sure if it's for the best. It actually reminds me of a view near the big wheel in Las Vegas (except that's a really busy area with lots of shop, restaurants and people)

So, I think I'm going to leave my last sketch untouched. If I want colour, I should go straight to it. If my instinct was to draw in black/grey ink, it was most probably for a reason!


This view is from the main plaza (I didn't draw the red pillars - they're a distraction to my eye). There is major construction work at the site of the old Boland Flour Mills. Three big towers are being built - two for Google offices, one of apartments (for Google employees possibly?? Who else could afford these?). And yes, the Dublin skyline is full of cranes again! Love sketching those!

And then, a few days later, I felt this urge to add shading!! Much happier now! I love exploring new ways to sketch, even when they ruin what was already there before. I don't learn by playing it safe!

Check out the other sketchers' work on Dublin Sketchers' website. I never tire of discovering how others interpret a scene.