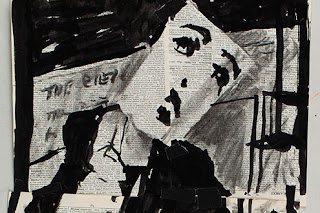 I can't believe it's a week since I was at the Met HD screening of Lulu!

After reading about it and checking out the videos on the Met HD website, I wasn't sure I was going to stay beyond the first act - I was worried I would not take to the atonal music. Me and my opera-going companion had agreed that if we didn't like it, we'd make our escape at the first intermission. But we didn't need to. The music is what it is, but for the most part, I found it quite melodic. The part I liked the least was the third act, which was actually completed by someone else after Berg died, having left the opera unfinished.

But the production was very much to my taste - Kentridge, who had done The Nose last year (which I didn't like) drew so many ink sketches for Lulu. And they were photographed, blown up and projected onto the stage, telling the story of in a sort of graphic novel way. I would love to see all those sketches up close! Because of the way the HD production is filmed, you don't always see the full stage (close-ups etc), but I'd say it was stunning for the audience at the Metropolitan Opera.

And bravo to Marlis Petersen. What a Lulu!
Posted by MHBD at 11:25 am