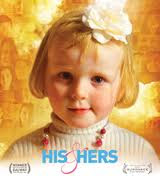 I went to the pictures with Susanne a few weeks back - I really haven't had much time to write lately.

His and Hers is an Irish documentary, or rather it's a series of interviews with women of the Midlands, from the very young to the very old, as they sit in their kitchen or parlour and comment on the men in their lives, father, boyfriend, husband, son. It's very sweet, funny, and poignant too.

We both enjoyed it - even to the last little old lady who was talking to her son on the phone, she'd be telling him she was well, but at the same time she was worried it would be too much of a shock for him if she was to die suddenly. Not one bit worried about herself. Typical Irish mother! It's really about all the hopes and joys and sadness of an ordinary life. One note of warning though - not a single separation, divorce or wife-beating - according to His&Hers, all is rosy in the Irish Midlands.
Posted by MHBD at 12:14 pm