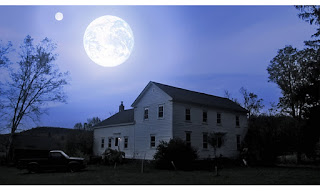 Very unusual movie, Another Earth. Apart from the fact that there is another Earth in the sky, it's not science fiction at all.

A young woman with a promising future is driving home after a party. It is announced on the radio that a new planet has just appeared in the sky, another Earth. It looks identical to our home planet. Does it carry life? How can we contact its inhabitants? As the woman looks up at the sky, fascinated by this new body in our sky, she swerves, and crashes into another car, killing some of its passengers.

When she gets out of jail a few years later, her life is very different from what it would have been if not for the accident. What follows is a story of loss, despair, atonement, and hope.
Beautiful.
Posted by MHBD at 2:16 pm