I'm falling way behind in my reviews, or maybe I've been watching so much good stuff on the telly that it's hard to keep up.

Generation Kill is a DVD set I got Brendan for Christmas, and we watched it in the early weeks of January. And now we're in March, and I'm finally sitting down to review it.

It's the story of a platoon of Marines during the invasion of Iraq and the toppling of Saddam Hussein. Not sure if "platoon" is the right technical term. Maybe it's a "company". You see, I knew all the technical terms when we were watching it, but now it's all a bit vague (There was a nice feature on the DVD by which you could pause, and display a glossary of terms, a summary of the various characters and their position in the chain of command). But, never fear, if you want all the jargon, there is a section of the website dedicated to the Linguo. 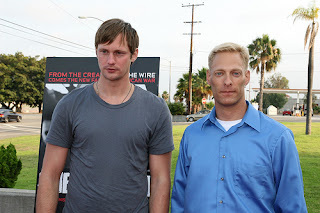 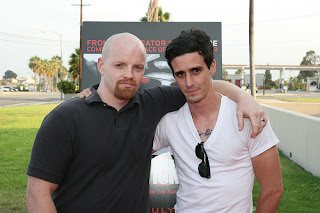 Very good story, great characters, and the amazing thing is that it's all true. A journalist from Rolling Stone is embedded with the platoon and the series is based on his book, an account of what he saw and heard during his time with the battalion. One of the features on the set is an interview of the actual soldiers whose story this is. Most of them are not in the army any more, one of them is now working in Hollywood and he actually plays himself, which is a bit weird! The main guy, Brad Colbert, is played by Eric from True Blood. That is to say, it's played by the actor called Alexander Skarsgard, a tall and handsome young man of Nordic extraction (he's Swedish, actually!). And he does look a lot like the real Brad Colbert. Well, maybe not so much in actual looks (and the picture here doesn't do him any justice - he must have been filming True Blood at the time this photo was taken!), but in his demeanour, his way of talking, cool under all circumstances, and ever the gentleman. Quite a different persona from Eric!

Some great characters, and also good story lines, showing the contrast between the dedication & professionalism of most ordinary marines (although there are also some looneys in there) and the incompetence of some of the commanding officers.

And if, like me, you're squeamish, be warned that there are some gruesome scenes. This is war after all. But all the main characters come out of it alive. Maybe I shouldn't have told you this - half the tension in the story is whether or not they will survive, but, once you start watching, you'll have forgotten this blog after 5 minutes.

Again, I recommend you turn on the sub-titles if you want to catch all the bad language
Posted by MHBD at 9:17 pm

Email ThisBlogThis!Share to TwitterShare to FacebookShare to Pinterest
Labels: TV