We went to see Neil Diamond at the 3 Arena on Friday night.

I had a ball, despite my bad arm - I bopped the night away, along with the rest of the audience (apart from that woman there behind me who didn't seem to get into the spirit - maybe she doesn't like to sing along?) 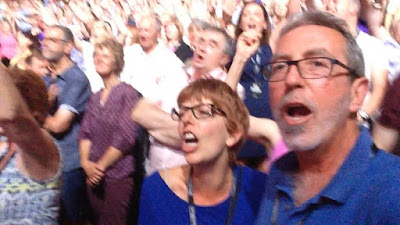 And then, as if one night wasn't enough, I watched the second Dublin concert last night, live on Periscope, thanks to Neil Diamond's wife, Katie, who seems to be filming every single concert on her iPhone and posting them live to Periscope for the fans. Thank you Katie! If you want to watch the remaining concerts, check out Neil Diamond's Twitter feed where you'll find the Periscope links. But bear in mind that the streams expire fairly quickly after each performance. Yesterday's concert is still on as I write this, but it'll probably be gone by tomorrow.