I've read a few Philippa Gregory books. She is a master of historical fiction - taking characters from British history and filling in the blanks with her imagination.

This time, with The White Queen, she went back to 1464, and the War of the Roses, and if anything, court life is even more violent than with the Tudors. The book follows the path of Elizabeth Woodville, who marries Edward IV. It's a time of intrigue and constant fights for the throne. I found the Elizabeth depicted here to be not as likeable as some of the other characters in Gregory's other books, The Other Boleyn Girl for instance. 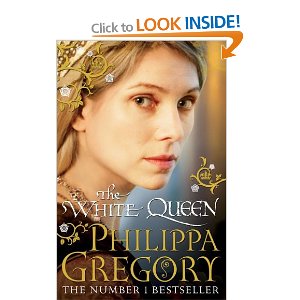 While Mary Boleyn appears to be a victim of her circumstances, but a nice person, Elizabeth Woodville is very much in control of her life. What's wrong with a strong woman?, says you. She is ambitious, for herself, her family and her children. But the choices she makes have repercussions beyond her cunning and magical plans (her mother was believed to be a witch, and Elizabeth is presented as having some knowledge of witchcraft), and everything seems to slip away from under her. When she becomes Queen, she becomes obsessive about placing relatives in positions of power, which backfires, as it causes a lot of resentment amongst other noble families, who start plotting against Edward. And yet, she keeps on fighting and manipulating, using, and losing, her parents, brothers and children in the process

So this is very much a book of the rise and fall of a powerful woman. Could she have used her powers more wisely? Could she have learned the lessons earlier and retired to a peaceful (and powerless) life, and saved her children in the process? Or was it just that there was so much rivalry between brothers and cousins that her fate, and her family's, was sealed the moment she married Edward IV?
Posted by MHBD at 10:10 am