OK, I call it big rhubarb. But it's nothing to do with rhubarb at all. It's called Gunnera Manicata.  According to Wikipedia, it was named after a Norwegian bishop and naturalist Johan Ernst Gunnerus, who also named and published a description about the basking shark (which can be seen at the North of Donegal). It's thought to be around 150 million years old. It is native to Brazil, where it is used in traditional medicine to cure sexually transmitted diseases!

It is one of these plants that you will find in big Irish gardens, often beside a pond. I came across the ones that inspired this painting in a little hollow in Kilmacurragh Botanic Gardens in County Wicklow, just half an hour from where we live on a cold day late in October. It was one of those days when you think the sun is going to come out, but it's reluctant. Then it finally appears when you're ready to go home! 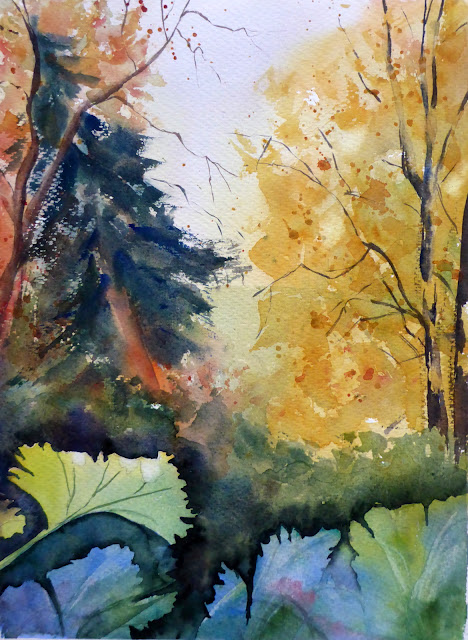 Initially I struggled to capture their shape and colour. They didn't pop the way I wanted, so I lifted paint, and when the paper was dry, I used negative painting to again try to define the shape of these pre-historic plants (come to think of it, most plants are probably pre-historic, aren't they?). Here is how it looked originally. I was happy with how the trees in the background looked but the foreground was quite a mess. Perylene Green and a pointed brush to the rescue, plus a mop brush with water to create a soft edge above the plants!
Posted by MHBD at 11:09 am