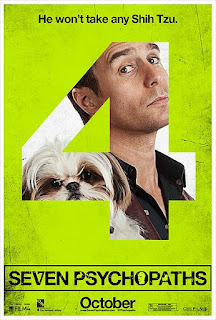 I wasn't sure I was going to like this one - what kind of a title is this anyway?

But Seven Psychopaths was so much fun I couldn't resist it. It is a movie about making a movie - Colin Farrell is a script writer who's going through a dry patch - or more precisely a wet patch - he's drinking too much and writing too little. He's got a good title for his movie - yes, you guessed it, Seven Psychopaths - but so far not much of a story. Until his unemployed actor friend, played by the guy from Moon, what's his name again? I really like him but I can never think of his name - Sam Rockwell! Thank you Wikipedia!, so, until his actor friend played by Sam Rockwell gives him a newspaper clipping about a mysterious killer, who only goes after middle-to-high-ranking gangsters and leaves a jack of diamonds card at the scene of the crime. There are plenty of twists and turns, lots of blood, and even an appearance by Tom Waits.

Thoroughly enjoyable, if you don't mind a few gory deaths. Oh, and the dog is really cute.
Posted by MHBD at 6:06 pm