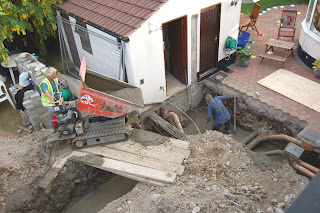 After 6 hours of waiting, the concrete lorry finally arrived, after 6 pm. In fairness, he was due in around 4 - the lads had been quick in getting everything ready this morning, and had the steels in place before noon. So, they had a nice relaxing afternoon on the porch of the shomera at the back. But when 4 came and went, then 5, they were getting a bit annoyed, knowing that they would have a couple of hours' work to pour the concrete. It's now 20:15 and the concrete lorry man is washing the road (there is a power hose built-in to the lorry), which I guess means Stan and Fran are nearly done. Fran has been going back and forth with the little wheel-barrow thingy (a digger, but not for digging, it's got a big tilting bucket at the front), getting the concrete from the lorry and pouring it in our moat, while Stan is in the moat, in his wellies, and is shoveling the concrete down the moat to the end bit where the wheel-barrow thingy can't reach.
A picture speaks a thousand words. I bet you wouldn't have known what a wheel-barrow thingy is without this picture!

My heart goes out to these 2 guys - waiting all day, and then having to do such hard work so late on a bank holiday Friday. 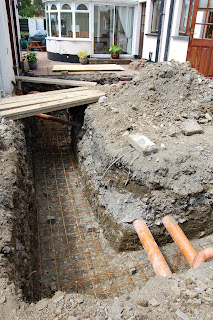 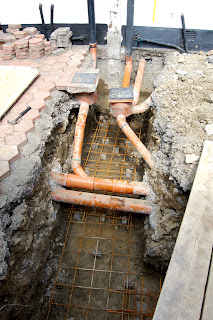 This picture shows the pipe spaghetti junction quite well.

Email ThisBlogThis!Share to TwitterShare to FacebookShare to Pinterest
Labels: Extension