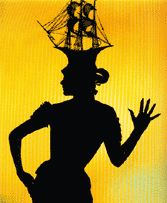 Last Sunday week, we went to the Design Museum in Collins Barracks to have a look at the Eileen Gray permanent exhibition (on the top floor), which was very good. I'll probably talk about it more some other time. On the way out, we stumbled upon the exhibition "When Philip met Isabella, Philip Treacy's hats for Isabella Blow". And we are glad we did! The exhibition (which is free by the way) is all about mad hats designed by Philip Treacy (who studied in the NCAD) for his muse and sponsor, Isabella Blow. The exhibition is temporary, but has been extended until 2 April. 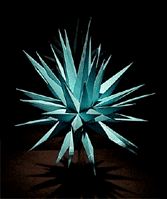 There are hats that look like turrets, like a French 18th century sailing ship, like mad horns , like UFOs, in all colours, black, bright pink & green, with and without feathers (most of the feathers are carefully cut to look just perfect).

There is even a sculpture, which I think is supposed to represent Isabella's face in profile when you look at the shadow it casts on the wall - well, that sculpture has got heads of crows, the head of a red-robbin, it also has bits of a rat, of a rattlesnake and a lipstick. I'm glad to say I couldn't make out the rat bit! It's gross, but it's also fascinating. I won't put a picture of it here, but you can find it on the web!

Now, I have to say that Isabella Blow is not a particularly pretty lady, but she is supposed to be "one of the world's most influential creative directors!"

A matter of taste, I guess!!

You can find some pictures of the hats at the British design museum site: here
There are also pictures from his shows at his own website: here
Posted by MHBD at 6:54 pm