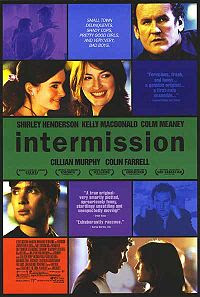 Brendan got a loan of the Intermission DVD from Niall last week, and we watched it a few days ago. It was better than I expected, but I think that Brendan found it somewhat disappointing. It's an Irish movie, with Colin Farrell, Colm Meaney (of Star Trek fame), Cillian Murphy (known for his piercing blue eyes), Kelly MacDonald (she was in No Country for Old Men) and a few other familiar faces from the Irish cinema scene.

It's a gangster story, and it's also a love story (or multiple love stories). It's funny in parts, and violent in others. I found that the opening scene was quite a shocker. I'll say no more. I enjoyed it because it didn't take itself too seriously, but I think that's what Brendan didn't like about it - the fact that it's all a bit too slapstick. Also the fact that the acting style came straight out of "Fair City" (an Irish soap that neither of us can stand, as the acting is wooden and the lines all too predictable!).

Note that the credits state that "no animal was killed in the making of this movie". I wonder was the sheep already dead?
Posted by MHBD at 1:49 pm