Global Warming is certainly bringing some strange weather to Ireland. We're well accustomed to rain. But not to tropical downpours! I wouldn't mind if we got some tropical sunshine and heat, but it's just grey and wet, very wet. It rained heavily again today (and no leaks, I'm happy to report!), but it didn't feel thundery, there was no grumbling in the distance, or anything to prepare us to what happened this afternoon.
I was in the upstairs back bedroom, browsing the web. All of a sudden, there was this huge flash in the sky, more or less at my eye level, between our house and the house behind, like an explosion, and the percusive sound was like a gun firing against your ear. Really scary. I ran down the stairs, calling Brendan, and as I got no response, I had visions of his chared body by the computer in the kitchen. And then I saw him rushing out of the shomera, alive and well, but as shook as me by what he had experienced. He didn't see the flash as such, but the explosion sound was so loud and so near that he thought one of the computers had blown. He had only just gone out to the shomera, and was about to sit at the computer. He was lucky he wasn't outside at the time. He had been outside, between the house and the shomera, less than 2 minutes before lighting struck.
We waited for the mad rain to stop, and went to check on things in the shomera. All was well there. Computers are fine, the phone is fine, but the telly hasn't come back on yet - we suspect it's NTL, as everybody we've talked to on the estate has told us their telly is down. 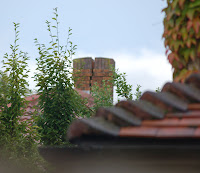 We were the lucky ones, that's for sure. One family wasn't so lucky, although nobody was injured, thankfully. When we heard a siren, like half the estate residents, we went to have a look. 2 firebrigade trucks and 2 garda cars were at the scene. Lightning had struck the chimney in one of the houses at the top of the estate (highest point and all the rest), breaking it in 2, and, according to a neighbour we talked to, the force of the lightning pushed the fireplace out across the living room. I'm not sure how much damage was done, but I can only imagine how scary this was for the family, who were in the house at the time. And the worry about the structural integrity of the house ! What a nightmare it must be.
I've never experienced anything like this in my life. I've seen bad thunderstorms in Belgium and Switzerland, but never anything so sudden and violent. I hope I never see anything like it ever again. 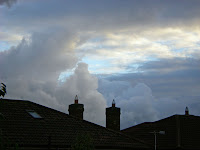 Half an hour later, the sun was shining, and the rest of the day has been more or less dry, with very dramatic skies.

PS: picture of the chimney courtesy of our intrepid photographer, Brendan!
Posted by MHBD at 7:52 pm