We’re sitting in the Perth airport Domestic terminal, awaiting our flight to Alice Springs. It’s nice and cool in here, but out there in the sun, temperatures are well above 30 degrees. Perth is a hot city, where the sun never ceases to shine. It must be a really boring job to be a weather forecaster here – blue sky and sunshine every day.
When we got to Western Australia last week, we rented a car and set off North of Perth at 6:30 am – our goal was to get to Monkey Mia (over 2 days’ drive), but there was a cyclone near Exmouth (a bit further North – probably 500 Km – this is a big country), so we decided to head back South after 2 days in Kalbarri.
Kalbarri is where we encountered our first live wild kangaroos (we had seen a few dead ones on the road from Perth – not a surprise when you see the size of the lorries (big 3-trailer road trains) and the metal guards in front of the cars’ front bumpers. I guess that if a kangaroo jumps out in front of your car, you keep on driving – we heard on the radio that there had been a car crash the night before, where a lady swerved to avoid a kangaroo, and her son died in the accident. Although the radio broadcasters didn't say it in so many words, it sounded like the kid wasn’t wearing his seat belt, as he got ejected out of the car. I guess it must be a struggle at times, but, without a belt, a minor accident can turn into such a tragedy. My heart goes out to this poor lady.
Kalbarri is also where we saw our first real bush and red earth, and where we experienced the flies! The minute you leave your air-conditioned car, millions of flies descend upon you and settle on your clothes and your face. The worst bit is when they try to get in between your glasses and your eyes, or in your nostrils. 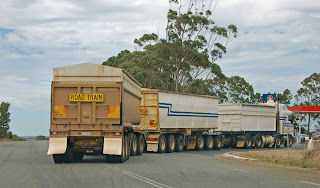 The sea was quite rough and I took dozens of pictures of waves crashing on the beach (plenty of nice beaches around Kalbarri). It was hot up there, and it felt like the real country, not some prettified version of Australia. The roads were good, not busy at all, apart from the road trains, and Brendan talked me into driving for a bit. This was my first time driving outside of Ireland, and my first time driving an automatic. I can’t say I enjoyed the experience, but it wasn’t as bad as I thought. I even overtook a road train, a nerve-wracking experience, which I undertook reluctantly (and after much swearing!), but in the safety of an overtaking lane, it has to be said. Brendan had to keep from laughing when he saw the look of concentration on my face. In total, Brendan drove over 3500 km, while I just drove for an hour and a half! 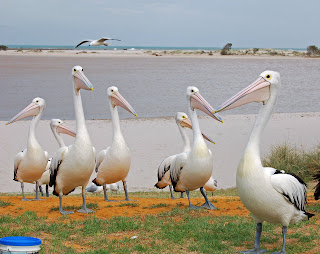 We saw pelicans up close on the beach in Kalbarri (they do a daily feeding – we don’t approve of feeding wild animals, but it does provide good photo opportunities). 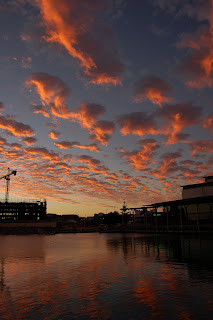 After 2 nights in Kalbarri (we stayed in the Kalbarri Seafront Villas - nice apartments, with all the facilities you need), we drove the whole way down to Perth and beyond (over 7 hours of driving) and stopped in Mandurah, a suburb in the South of Perth – a nice little town by the sea. We stayed in a motel and really enjoyed our evening there. Plenty of places to eat all around the seafront, and a lovely walk by the water. We ate in Han’s, an Asian eatery with the cheapest prices in town, and excellent quality food. Han’s have a few branches around Western Australia (we saw another 2 in the city centre), and it looked like the one in Mandurah is brand new. I had a delicious Thai beef salad and garlic squid, while Brendan had a Vietnamese prawn roll and a green curry. We were sitting on the top balcony, with the sun blazing down over the water, and we both enjoyed the food and the scenery – gorgeous sky - plenty of puffy clouds reflected in the water.
In the morning, we slowly headed further South towards Margaret River. We drove for a bit around the Mandurah suburban estates, stopped at a lovely beach, where school kids were getting their swimming lesson – it beats the cold, drab, swimming pool where I learned to swim. As we were following a detour through an estate, we saw a sign for kangaroos at the side of the road, and, lo and behold, there were 4 kangaroos leisurely grazing in a park nearby. We got out of the car of course and took as many pictures as we could, but, unfortunately, they hopped off before we could take close up photos.
Posted by MHBD at 5:57 pm

Email ThisBlogThis!Share to TwitterShare to FacebookShare to Pinterest
Labels: holidays