“Woman who stole from charity sentenced”
I kid you not, this was the headline in Arrowtown this morning. A deeply troubled town… I think the town elders will need to meet up and take drastic measures to prevent further social decay of their little idyllic town.
A couple of days ago, we thought we might take a coach from Queenstown to Milford Sound and stay an extra night in Arrowtown, as we didn’t want to face a difficult mountain road. But a fellow traveller (a lady from Vancouver whose campervan was stopped at the same lookout point as us) told us yesterday that the road from Arrowtown to Te Anau was fine (and their campervan was bigger than ours), so we decided to chance it, and we’re glad we did. The road follows lake Wakatipu for a bit (spectacular views, and a good wide road), then, after Kingston, it follows a wide valley for most of the way to Te Anau. Not a single switch-back bend or narrow stretch of road (see map here). And Te Anau is such a glorious setting – Te Anau Lake and the Fjordland mountains in the background make for perfect photo opportunities all along the shore. The Top 10 caravan site is quite packed, but we have a good spot at the back, and the sun has been shining all afternoon, so we’ve had a great day all told. Hopefully the weather will hold for tomorrow (the 4 Square checkout lady told us it was supposed to), as we’re going to Milford Sound on a Fly-Cruise-Coach trip. But even if it’s raining in the morning, I’m sure we’ll have a great day. Those mountains look spectacular, even in the rain, I’d say. Just as well, as it rains a lot in the Fjordland – 6 metres of rain per year! 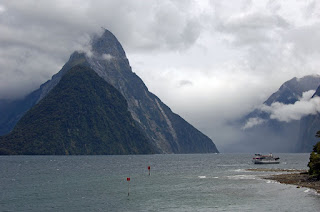 PS: As it turned out, the weather "collapsed" at Milford Sound the following morning, and we ended up on a coach rather than a plane. And we were glad we did - we were not supposed to make contact with the tour company until 11 am, for a 12 o'clock flight, but we happened to walk by their office at 9:30, and I decided to pop in. They told us that they wouldn't be flying, but they could book us onto a 10:00 coach. It was a mad dash back to the campsite - thankfully I had our bags organised the previous evening - and we got on the coach all right. 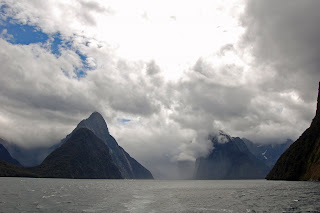 Fabulous road (plenty of narrow roads and switchbacks, and quite a few coaches working to a schedule, so we were delighted not to be in the campervan), and Milford Sound was out of this world. The weather was not quite as "collapsed" as they had made it out to be, and it lifted enough later in the day for planes to land and take off. Brendan has flown to and from Milford Sound on Microsoft Flight Simulator, and we would have loved to experience it for real, but it wasn't meant to be!

When we got to Milford Sound, it was straight onto a boat for our cruise. Brendan and I got the best spot on the boat - right at the front on the open deck. We were glad of our extra layers and rain jackets. It was breezy and cool. And wet when we sailed straight through a low cloud. I took lots and lots of pictures, but none of them quite render the sheer magnitude of the place, and the sense of wilderness (despite the few other big boats on the fjord).
Milford Sound is a place I'd definitely would like to go back to, and stay overnight, as the light is said to be best at dawn and dusk.
Posted by MHBD at 10:20 am