I am 31 years in Ireland, and one thing that I have only recently noticed is that hedges are very popular in suburbia here. Looking at works from urban sketchers around the world, and from my own experience in Belgium until my early twenties (and now you know my age), it seems to me that people in other countries like to show their houses to the world, whether it is to display their wealth or to let in the light, I don't know. In Ireland, well, in South Dublin anyway, houses are often hidden away behind high hedges. I believe there are bylaws that prevent the erection of high walls in front of houses, so we have a combination of low walls and high hedges and trees instead. Are the Irish more private than their European counterparts? Is there a similar trend in the UK? I don't know.

All I know it that low walls and hedges are very hard to sketch in terms of perspective! 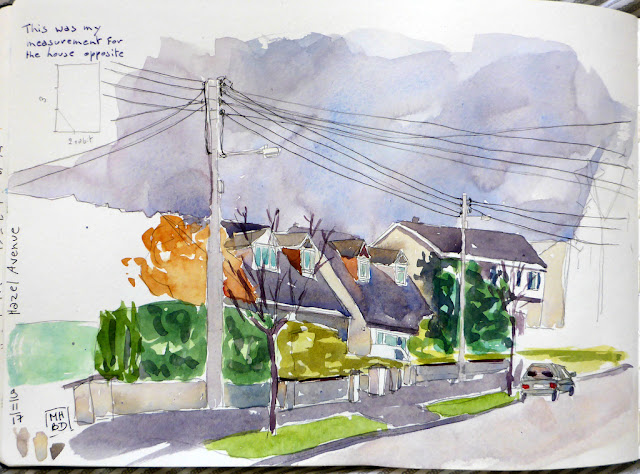 Another thing of course are the electricity cables - in more central areas, they are all underground. And probably in newer neighbourhoods too. But I love the criss-crossing of those cables! Another thing I love about Japan too, actually, those electric cables - they are everywhere, in cities and towns. A friend of mine thought they looked ugly, but I like them. I've only sketched them once - I'm not fast enough of a travel sketcher to make time for good sketches when on holiday with my husband. He's very patient, but half an hour is not enough for me (on that occasion, he was buying a knife, so I left him inside the shop and sketched outside).  And did you know why Japan, a modern country, doesn't bury its electric cables underground? Because of the earthquakes. Much easier to find and repair the faults when the cables are above ground!

(Sketched from the car - and I did attempt to draw a car on the side of the road and a white van in a drive - the white can got cut off as I was painting a gable wall and forgot about it, but you probably didn't notice until I told you. Did you?)
Posted by MHBD at 12:09 pm