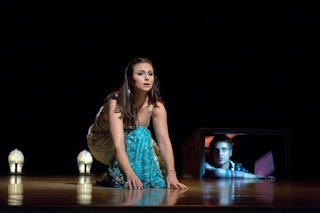 I often know within the first ten minutes if I'm going to love an opera. With The Tempest, I knew the moment Miranda fell asleep and slipped down the prompter's hatch that I was going to love it. Of course, it's based on Shakespeare, so I knew the story would be good. But I didn't know what to expect in terms of production - though with Robert Lepage producing, I knew I would enjoy it. (How many times have I used the work "know/knew" in these few lines?)

Not that I liked the singing that much, I have to say, but the music was gorgeous and the sets (Prospero's island is a reproduction of La Scala's opera house, and we see it from various perspectives as the action unfolds), the costumes (including Prospero's tattooing), the acting, the acrobatics (Ariel is singing while hanging from a swinging chandelier - though I think there might have been a double for that part), the lighting (how the stormy sea is evoked through a moving sheet lit in blue) - it all worked beautifully - it was imaginative, fun, passionate, gripping. .

When I say that I wasn't that crazy about the singing, maybe it was the parsing of the words. Too modern for me - I like melodious arias and Mozart-like duets and trios and quartets! I think the main character that didn't work for me is Ariel, the sprite who is working for Prospero. Ariel  has high notes the whole time. Yes, maybe it does represent the character well, but it's not that pleasing to the ear. Don't get me wrong, the character was wonderfully executed by Audrey Luna, but I just don't like the sound of a high soprano!

Is it a case that the visual production is stronger than the music? Well, there was so much to take in visually, that I think I would need to listen to the music on its own to really appreciate it. Anyways, the Met's mini-site is worth a look and a listen if you have the time (though I found the video streaming was stuttering, but maybe it was my laptop?). As for me, I must check if I can find a recording on spotify (it's not an opera that I imagine myself listening to on a regular basis, so I don't think I'll be buying the CD. I would buy the DVD of this production, if it becomes available, though.).

PS: Just found it on spotify - I had to search for Thomas Adès with the accent (alt-138) - other searches didn't bring it up. Well, I'll be off listening to it now.Will report back at a later time!
Posted by MHBD at 5:59 pm