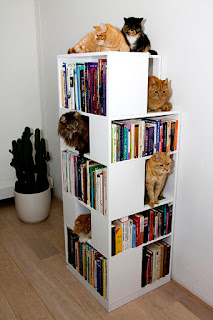 I came across this article about the 10 naughtiest dog breeds. A friend of ours was thinking of getting a new dog and was wondering what type to get, so I thought of her when I read it. We would love a dog ourselves, but we have a 12-year-old cat, whom we don't want to upset, obviously. We've read plenty of horror stories of cats disappearing after a new pet was brought into the home, and we don't want that to happen. We were thinking that a lurcher might  be a nice dog to have - they're apparently very lazy. But I read somewhere that they had a habit of running after cats - a bit like greyhounds run after rabbits? So, we're in a holding pattern at present.

And for those of you who prefer cats (though one doesn't necessarily exclude the other), there is an equally good cat website here!
Posted by MHBD at 6:03 pm