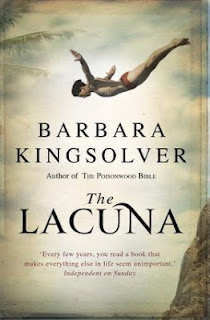 I finished reading Barbara Kingsolver's The Lacuna a short while back. A magical book, set in Mexico in the 1930s and 40s' and 50s' America. It's told mostly in the first person, by a fictional character, Harrison Shepherd, half American half Mexican, who grows up in a remote part of Mexico with his mother, and discovers a "lacuna", a waterhole that you can swim through from the sea, emerging into a deep open-air cave in the middle of the jungle. The word takes on many meanings through the story.

The book opens with an exotic, far from idyllic, childhood on an island off the coast of Mexico, develops with the fascinating, colourful, pulsating and dangerous world of Frida Kahlo, Diego Rivera and Trotsky, in Mexico city, and ends in the dark McCarthy times in America after World War II.

A beautiful beautiful book, rich and fun and deep and tragic.
Posted by MHBD at 12:19 pm