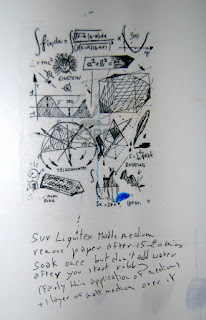 I found this other video, which I think is actually better than the other ones. The guy is a bit slow and meticulous, but the transfer I did using his instructions, and Liquitex matte medium, worked out much better than the others. Drying time was about 20 minutes and the result was really tidy. I think I used a thinner layer of medium than recommended, but it worked out perfect anyway. This is a little picture I found on the web and that I used for this transfer.

I'm going to try it out with a photograph on a darker background now and see how it works out. I think the background I've chosen may be too dark, so there won't be enough contrast with the picture. Also, I wanted to have some text in the background, but I'll probably have to cover it or it will show through the transfer.
Posted by MHBD at 7:48 pm