I didn't think that a larger version of Red Sky, Red Earth would work, but I was wrong. It was quite easy to do in the end. I had to get plenty more acrylic glossy medium for my base layer, which I got in Kennedy's. I had rung earlier to see if they had what I needed, but I got quite worried when I saw a lady ahead of me buying tons of acrylic medium, and I thought I had made the trip into town for nothing. But the gentleman whom I had talked to on the phone had set aside the medium we had discussed, fair play to him.

I've used less oil pastel, which I think works better, less fussy. On the other hand, I wish I had used a slightly stronger yellow as a base - I find it too pale. Not sure how we'll go about framing this one - it's painted on canvas board, but no doubt the man in Village Framing will work something out. 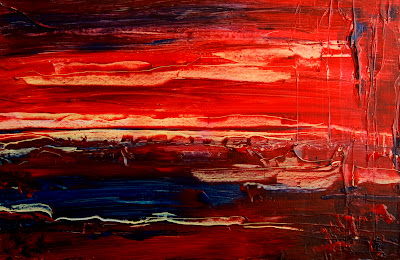