I had checked the Movies at Dundrum listings but could not find anything about the Met HD transmissions. As Opera Ireland had ceased to exist, I could not find any information and had given up on it. Until Lucinda mentioned that she had heard that this season of Met opera would be shown at the Screen in town, as well as the cinema in Dun Laoghaire. With only a week to spare before the first performance, I didn't think I'd manage to get tickets, but I was lucky and even got a seat for the first show of the season, Anna Bolena.

The heavy rain that started almost the moment I left the house didn't stop me. I had an umbrella and good shoes. After purchasing a bottle of water and a pack of jelly babies, my favourite opera nibble, and making my way down Grafton Street, I was all set.. 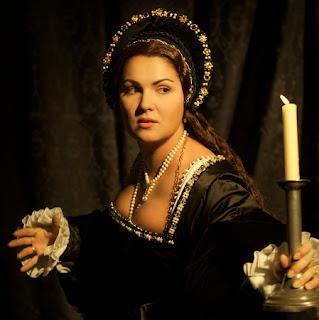 I didn't know Anna Netrebko, but, according to the gentleman sitting next to me - and he was quite the opera buff, so I'd say he was right - she was the main reason the show was sold out! Beautiful stage presence, dramatic acting and a clear, powerful, delicate, voice. I was not familiar with Donizetti's operas- after Anna Bolena, I will certainly be tempted to try out more.

I felt the stage design on the bare side, with some strange choices - I didn't like the tree trunks coming down from the sky to set an outdoors scene; the red bed didn't work - I would have felt it more appropriate for the scene between Henry VIII and Jane Seymour; and what were those Irish Wolfhounds doing on stage?

That said, the stark set and dark lighting conveyed a strong sense of oppression and impending doom, so I can't knock it. 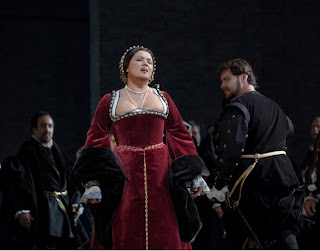 The costumes were beautiful. The costume designer based her work on paintings and drawings from the period by Hans Holbein - from the simple linen undershirts with embroidery around the collar, to the way each outfit was actually held together (for instance, some of the sleeves were just tied to the bodice rather than sewn), most of them in blacks and browns. The only fancy outfit was Henry's golden Court coat. And it was interesting to see Anne Boleyn shedding her jewelry as her star wanes in Court.

The acting was good, if a bit dramatic - but I think that's expected in such a tragic bel canto opera. The only singer whom I felt was too restrained in his acting was Stephen Costello, who sang Lord Percy. An Irish American according to my knowledgeable neighbour! I felt the character's passion wasn't showing through, amidst all the drama. That said, he was a beautiful tenor. And considering how young he is, I think he has plenty of scope for developping his acting skills.

Good interview with Anna Netrebko, who comes across very friendly and witty, not a diva at all, and Stephen Costello & the director of the Metropolitan Opera here.

PS: It's a real shame that the Opera Ireland bi-annual live opera productions no longer exist. Apparently, they closed down to make way for a new Irish National Opera Company that was going to be set up in 2011. But I have just found out that it has collapsed, even before reaching its first production.So, we're left with no live opera season in Dublin this year.
Posted by MHBD at 11:40 am