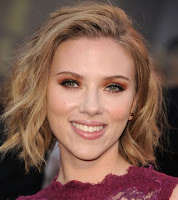 We've watched two movies with Scarlett Johansson recently - Lost in Translation, the movie that put her on the map, really, and Vicky Cristina Barcelona, one of her more recent endeavours.

To me, Lost in Translation wins hands down - it's such a lovely, understated, story of two people lost, lost in the foreign world that is Japan, and lost at this point in their lives. And the fact that we'll never know what Bill Murray whispers in her ear at the end of the movie is what makes it!

Vicky Cristina Barcelona, Woody Allen's latest movie, is an exploration of sex and relationships. Not his best movie, but not his worst either. It was quite watchable, but it's not one of those movies that's going to stay with me, frankly. All a bit too much, in particular, the character played by Penelope Cruz, Maria Elena, who is way over the top (though, according to Wikipedia, she won an Oscar for Best Supporting Actress for that role. Go figure!). Let me remind you, though, that it is on the set of this movie that Penelope Cruz  and Javier Bardem are said to have got together. You never know what goes on in relationships, but I'd say they probably are a better match than Scarlett Johansson (26 - I can't believe she is so young) and Sean Penn (50). But if they're happy together, I'm happy for them!
Posted by MHBD at 2:18 pm