Day at the Zoo

Having Amy with us at the weekend was the perfect excuse for a visit to the zoo. The weather was good on Saturday morning, so we headed out fairly early. After a quick stop at the Point Village big Wheel (more about that another time), we got to the zoo around 11:30, and it was already packed. As the day got sunnier and warmer, it felt like everybody in Dublin was at the zoo, most of them with prams and buggies! But I'm good at elbowing my way to the front of the crowds (good Belgian genes there), so we got to see plenty! 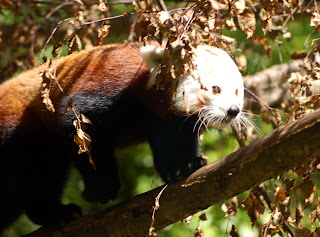 The new elephant area is excellent, giving the animals plenty of privacy, but also providing good viewing points for the crowds. And they've moved the giraffes to a nice big patch in the African savanna section, where you can get a good close look at them. Some of the younger giraffes were really gorgeous. Brendan's and Amy's favourite was the red panda, whereas mine was the tiger (the Sumatran tiger, if I remember correctly - we didn't get a picture of it, as he was behind heavy glass panels, so here is a link to the photo on the website. One of them was pacing back and forth really close to where the public was watching. I wonder, could he smell us, and did he think we might make a nice meal! What I liked about the tiger was the fabulous markings on his (or her) face. The red panda was also very active, and kept going over his (or her) territory, and marking it (just like a cat, a little lift of the tail and a shake of the bum).

Other highlights for me were the crocodiles (or aligators?) - one of them didn't move at all the whole time we were watching him/her. The 2 pythons in the water were pretty cool, if scary. And the sea lions show was exciting (but very crowded). And the gorillas, the penguins, the chimpanzes, the hornbill, the wolf, the bats, and the bongos (all of which can be found in the alphabetical list).

As usual, the food wasn't great, and there was lots of wasps in the eating areas (why don't they move the bins a little bit further from the table? Is it that they know that Irish people won't bother to throw things in the bins if they have to walk 10 feet to them?)

If you want to know more about elephant communication, check out this page. 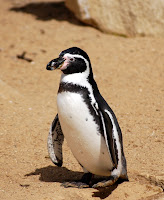 I can't wait for the next of our nieces and nephews to come over so we have the excuse for another visit (though it's unlikely we'll go to the zoo with David - he's getting a bit old for that!)
Posted by MHBD at 8:58 pm