OK, I think I've finished reviewing all the Christmas movies. I can now move on to more recent items. Well, relatively recent.

The last Met HD production I saw was Donizetti's Maria Stuarda - directed by David McVicar, with Joyce DiDonato in the title role. 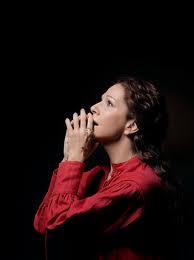 Very powerful production, fantastic music, fabulous acting and singing by Joyce DiDonato. To me, this opera was all about Ms DiDonato. What a beautiful voice. And what a convincing stage presence - vulnerable and hopeful, full of venom, exhausted, beaten and resigned to her fate - she conveyed all the emotions so perfectly.

While the confrontation scene is probably the one that stands out with the most powerful visual and musical impact, it was the second half that touched my heart, when Mary Stuart, having spent years imprisoned, knows that her fate is sealed - her whole body is shaking, but she is still a proud queen.

Elizabeth was played by Elza van den Heever, a South African singer - a promising young soprano, who, in preparation for her role as Elizabeth shaved her head, completely getting into character. Vocally, she also made a strong impression! The only thing I didn't like so much about her portrayal of Queen Elizabeth I was the swagger. It was discussed during the interval interview, and Ms van den Heever explained that McVicar had asked her to play Elizabeth with this swagger. She's effectively a woman in an man's world, and she has set aside her femininity in order to convey the power the befits her. Well, I became familiar with Elizabeth I through the acting of Helen Mirren and Cate Blanchett, so the swagger didn't work for me.

One small criticism of this Met HD filming: I felt that there were too many shots taken from bottom of stage, looking up towards the singers. I would have preferred a more "straight-on" view of the stage.

Beautiful sets and costumes by the way. I have to say I did prefer the historical accuracy that McVicar went for in the costumes chosen for Anna Bolena - but it was an artistic choice that I have to respect.

My next Met HD opera is Parsifal. Looking forward to it!