Time flies in December! All of a sudden, there is so much to do! 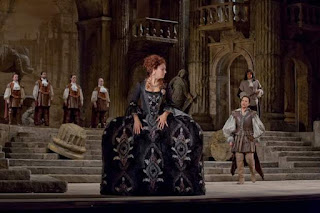 I'm not a snob. I love Mozart, and most of all, I love Mozart operas! I've had La Clemenza di Tito in my CD  collection for years. It's always a bonus to go to see an opera when you're already familiar with the music! And the production at the Met HD show on the 1st of December was a real treat. It wasn't a modern show, although the Romans were dressed more like people from the time of Mozart (18th century, according to Wikipedia!), but you can do those things with opera, that's the beauty of it. I had a wonderful evening, letting the music take me. I think I can never tire of Mozart! Beautiful arias like "Del piu sublime soglio", or duets like "Ah perdona al primo affetto (video is not from the Met HD broadcast - there is actually very little of it on YouTube)" is all I need at the end of a busy day!

As is generally the case with the Met productions, the cast was excellent, both vocally and in their acting skills. I particularly loved Elina Garanca as Sesto and Barbara Frittoli as the scheming and manipulative Vitellia. Barbara Frittoli brought a sense of lightness and frivolity to the role that I enjoyed.Vitellia is the kind of girl who wants the world to revolve around her.Yes, she was planning to get Tito assassinated, and playing with Sesto's feelings was all part of the plot, but OMG, let's not get distracted - it's all about poor Vitellia and keeping her happy! And when you have to wear a dress like that one, no wonder her nerves are fraught!

The next Met HD opera I'm going to is Berlioz's Les Troyens. I guess that won't be so much fun! I've just listened to a few minutes of it on Spotify so at least my ear knows what to expect, and it sounds very serious!
Posted by MHBD at 7:22 pm