We were on the lookout for a new TV series to watch over the winter when Niall recommended Breaking Bad to Brendan. I don't know how we had never heard of it - maybe it's not been showing on the Irish & UK channels? Like all the best in American television, what gives it its power is a good story, with characters who feel like real people. If you're not afraid of a few violent scenes, this story of Walt White, a struggling chemistry teacher and family man in New Mexico who finds he has lung cancer and decides to start cooking meth, is just amazing. No special effects (well, apart from the occasional explosion), no vampires or special powers. Just the exploration of how a terminal-cancer diagnosis changes your perspective on life. In a very different way from The Big C, it has to be said. I can't imagine my old chemistry teacher getting involved in the drug-dealing trade. I guess you have to accept a certain level of suspension of disbelief to enjoy these things. 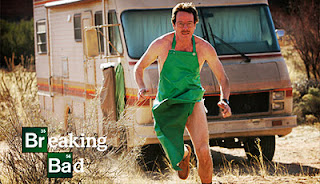 There are plenty of side stories that will develop over time, I'm sure. Like that of Walt's sister-in-law, whom we've just found out, has a propensity for shop-lifting. And Jesse, his drug-dealing partner, who comes from a posh family and whose little brother is a high achiever. But so far (we're at Series 1, Episode 7), it's mostly about Walt, his humdrum life as a teacher, his meager income supplemented by a part-time job in a car-wash, his son Walter Jr, who has cerebral palsy and is in high school, his wife Skyler, who is expecting their second child. One interesting complication is that his brother-in-law, Hank, is a DEA agent. I won't go into too much of the detail of how Walt discovers he has cancer and his impulse decision to make money for his family by making and selling drugs. But each episode so far has been full of surprises, twists, horrific turns (it's a violent world, after all), family love, and lots of good chemistry.

And the great news is - they're making Season 5, so we'll have plenty more to look forward to.
Posted by MHBD at 7:16 pm

Email ThisBlogThis!Share to TwitterShare to FacebookShare to Pinterest
Labels: TV