Things you don't see at home every day: hot drinks from vending machines

Another "Only in Japan" moment - we were on the platform at Narita airport, having just arrived, waiting for the Narita Express train into Tokyo, when I decided to get a drink from a vending machine - I chose a green tea bottle, expecting a cool refreshing drink. But the bottle that came rolling down the machine was hot. It was hot tea. Excellent, I enjoyed it. The thing is that, after that, we couldn't figure out how to get hot tea again! Until we were told that the hot beverages have a red sign, and the cold ones a blue sign. It does make sense after all.

Another time, we thought we were getting water (the drink was called Aquarius or something like that), but it turned out to be more like a lucozade drink. It was actually quite nice and refreshing. 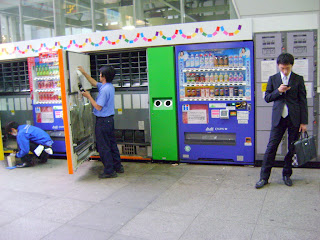 It would have helped if we had found some explanation of the various items in vending machines before our travels. I just came across a Flickr picture with hovers over each of the items!

We'll know for again. At least we didn't end up with hot corn soup by mistake!

And if you're curious what these vending machines look like on the inside, now you know!
Posted by MHBD at 1:11 pm

Email ThisBlogThis!Share to TwitterShare to FacebookShare to Pinterest
Labels: Japan