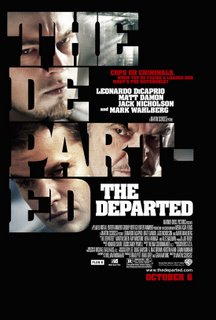 Two movies in a week! On Tuesday evening, we decided to avoid the trick-or-treaters, like we do every year, and went to Dundrum movies.

The Departed is a cops-versus-villains movie, with a good story and good actors. To quote from one of the movie websites: "The Departed tells of moles within the Boston State Police Department and the South Boston Irish-American mob". It's really the fight of good versus evil - although it's not always clear who is with the police and who is not, it's very clear who is good and who is bad. It's quite gruesome - if you don't like to see someone being shot in the head, this film is not for you (though some episodes of the Sopranos are worse in terms of gore).

It got very good reviews, and it was a good movie. There are two things that nag at me, though:
It was good, but would I watch this movie again? Probably not. Whereas "Little Miss Sunshine" will definitely be on my shopping list when it comes out in DVD. Does that say a lot about me?
Posted by MHBD at 6:08 pm